Trucks are made by the ago old method of casting. Sand casting dates back to the Bronze age. Molten metal is poured into molds, let to cool down and set hard. They are trimmed up, polished and bolted together. Today many trucks are Die Cast, it is a cheaper and faster way to produce the moulded parts.

The metals used are commonly aluminum, though titanimum and magnesium is being used again mostly for it's lightweight properties. Magnesium is a little more costly and is a highly volatile and flammable metal, making manufacturing highly dangerous. This makes the trucks more expensive, but they are very light. In the past trucks were also made of pressed and welded flat metal components. Though today most sand casted trucks are made from 356 grade aluminum.

Before a truck is even cast, models are made of either clay, wood, or epoxy type casting materials, or working prototypes are chopped and welded up etc, to find out the turning characteristics etc, then one off units would be made and cast for further testing until it the design is approved.

Once the truck has been tested and approved, final molds are made. These molds or patterns differ in the fact that they are made to produce a number of either hangers and base plates, perhaps up to a 1/2 a dozen of each in the one pour.

Indy tree of base plates. Courtesy of the Independent Truck Co 25 Years of Skating

The molds are made slightly larger than the finished truck as the metal shrinks approx 3% when cooled. There is a top and bottom pattern of each hanger and base plate.

The patterns then have removable sides clamped around them and then a special mixture of clay/sand is compacted on top. This is done to each half of the patterns. For the hangers a sand rod is placed in where the axles are to go. These Rods are made of sand and resin. When the molten metal is poured in the resin burns off and sand is left. The axles are then hydraulically rammed into place later. 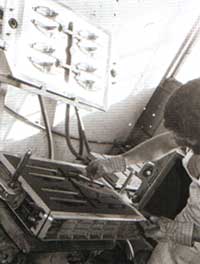 Placing the axle cores prior to casting.

The patterns are then lifted out and the two halves are clamped together. The 356 Aluminum is heated up to temperatures of about 1200F, a gas is pumped through to get rid of bubbles. The molten metal is poured into holes in the top, the molten metal runs around "gates" connecting the hangers, or base plates together.

Once the metal has hardened the sides are taken off and the sand is broken away from the components inside. The components are broken off the "gates", Just like you would make a plastic model and break off your parts from a frame. The gates are then re-melted.

Indy furnace showing ingots of 356 aluminum and trolley of hangers and base plate trees.

The components are then heat treated to a level of T6, this gives the truck its hardness and strength. T6 involves being kept at a very high temperature for up to 24 hours, this process is what makes good truck. This is also why axles are not cast in. Axles are already heat treated to become hardened, if they are heated again too hot they will loose their hardness. Cheaper trucks are die cast with axles in and only treated to T4 so the axles hardness is not affected. T4 is a lower temp and shorter time in the furnace.

Once the heat treatment is finished the trucks have the join bleed of the two molds ground off flush. The axles are rammed into place. They are then either polished, stone tumbled or finished in paint or an anodised finish.

The base plates are drilled in dedicated machines to the correct angles and size to fit the pivot bushings, the king pin and the truck mounting holes.

The two components are then assembled using a high tensile bolt for the king pin (grade 8). In good trucks a high grade urethane is used for the rubbers. The usual axle washers and nuts tightened. Pivot bushing placed in and the hanger is positioned, the top rubber and washer is fixed under the king pin nut.

Back to factory page