Dustin from the Blue Mts only skated for us for a very brief about of time. We first found about him when a mate of his sent us a video of him asking us that we sponsor him as his mum can't afford to buy decks for him and that he would have a great future. After one look at the video, we said shit yeah. This kids pants were bigger than him, but he was throwing down all sorts of shit everywhere. He is the only skater we have sponsored on a "Sponsor Me" video alone. Of course he was destined for bigger things and only lasted a few months when he was inundated by offers from bigger companies than us. The rest is history. 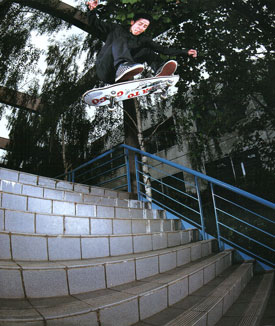 Back to Team History Page